Welcome from the Conference Organising Committee

The inaugural Aboriginal and Torres Strait Islander Suicide Prevention Conference gathered together experts and members of the Aboriginal and Torres Strait Islander communities and the wider community from across the country to Alice Springs, the heart of the Aboriginal nations. Over two days those gathered exchanged learnings, share lived experiences, built knowledge and inspired one another as to how we can best strengthen communities to tackle this entrenched tragedy.

The conference highlights report includes photos, quotes and social media snippets. The report is an outcome of a social journalism project for public health in Australia. 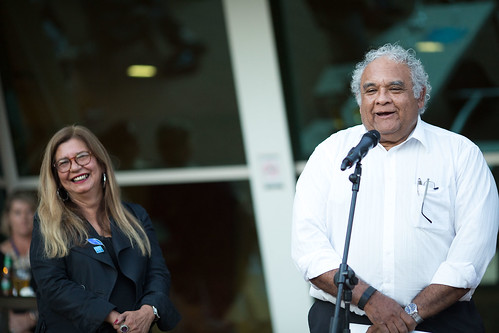 Abstracts presented to the conference were assessed based on the following criteria:

The themes for the conference were:

The conference program is available below. Stan Grant is a Wiradjuri man whose latest book Talking to My Country is a powerful and personal meditation on race, culture and national identity. A journalist since 1987, Stan has covered some of the world’s biggest news events and has received a string of prestigious international and Australian awards. He published his memoir, The Tears of Strangers in 2002 and in 2015, he won a Walkley award for his coverage of indigenous affairs.  He is Managing Editor of National Indigenous Television, Indigenous Affairs Editor at The Guardian and International Editor at Skynews. He is currently hosting a nightly news bulletin on NITV titled The Point with Stan Grant. Rosalie Kunoth was born in 1937 at Utopia Cattle Station (Arapunya) in the Northern Territory of Australia to parents of the Amatjere people. Her paternal grandfather was German, hence her German surname. In 1951, Kunoth was 14 years old and staying at St Mary's Hostel in Alice Springs when the filmmakers Charles and Elsa Chauvel recruited her to play the title role in their 1955 Jedda. Her nickname was Rosie, but the Chauvels changed her name for the screen to Ngarla Kunoth. Kunoth was the first Indigenous female lead. The ground breaking film was played for audiences at the Cannes Film Festival 60 years later in 2015.In 1970 she married Bill Monks, settled in Alice Springs and had a daughter - Ngarla. Proudly supported/funded by the Australian Government.

The University of Western Australia